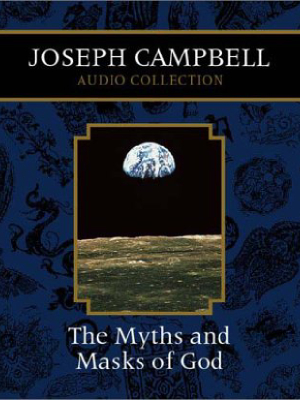 The Myths and Masks of God

Authorized by the Joseph Campbell Foundation, here is Volume Five of what will be a 40-hour series. These are the key lectures that Campbell kept in his study and used as the basis for later lectures on myth, symbolism, and spiritual awakening. Powerful and provocative, this program contains Interpreting Symbolic Forms, On the Experience of God, Mythic Visions, The Romantic Impulse, and Imagination and Inquiry.

In Man and Myth, Joseph Campbell explores the origins of mythological symbols and our use of them to reconcile the conflicts inherent in life. Provocative and full of wisdom, these lectures were the basis for Campbell’s later work on myth, symbolism, and spiritual awakening.

Joseph Campbell uses the biblical tale of the Garden of Eden as the starting point for an exploration of how we interpret symbolic forms. Observing that certain Western religious traditions view this story of Man’s “fall from grace” as a recounting of an actual event, he insists that this literal, historical perspective provides a limited understanding of the Garden story.

Joseph Campbell first distinguishes myth from the adventure story and the fairy tale. Then he describes the way in which myths are true. Though people who live by a mythology might not regard their myths as empirically true, mythic images continuously penetrate their psyches. So these people are living, Campbell argues, in a mythological realm, where their normal sense of space and time is suspended, and their visions in that dimension are therefore true.

Joseph Campbell charts the historic evolution of our experience of the divine. He describes the views of early hunters on the open plains, who deified their animal providers; the different reality of denizens of tropical forests, whose sacrifice rituals reflect the world around them; and the desire of inhabitants of the first villages to harmonize daily life with the mathematical progression of planets and stars. Common to these mythic visions, he observes, is the idea that the divine is “out there” in some form.

Tape 4: History of the Gods

Joseph Campbell explores the original sources of various images of divinity in religions around the world. No experience, he reminds us, can be fully understood except by the person who has had that experience; and nowhere, he observes, is this limitation more apparent than in the context of religious experience. As a result, the poetic images used to describe such experiences are often misunderstood by others.

Joseph Campbell explores the origins of important Judeo-Christian religious motifs. He interprets a range of religious symbols, from the western crucifix and its associations with the tree of life to the “fear not” mudrå the gesture of raised hand with exposed palm in eastern sacred sculpture. A central concern of all great mythologies, he notes, has always been the dynamic relationship between life and death.