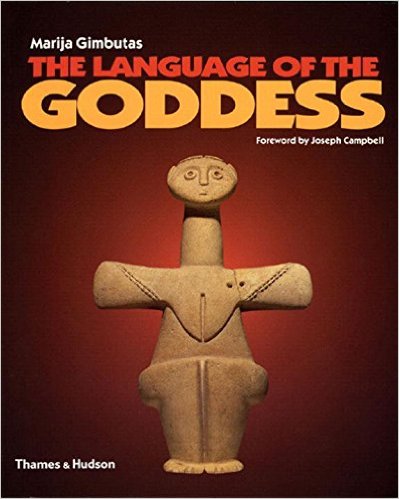 The Language of the Goddess

By Marija Gimbutas | Contributed to by Campbell

In this richly illustrated volume, the noted archaeologist and prehistorian Marija Gimbutas brings prepatriarchal civilization to life. A pioneer in archaeomythology — the interdisciplinary field based on archaeology, comparative mythology, and folklore — Gimbutas unequivocally establishes the existence of a goddess religion in Neolithic Europe with its roots in the Paleolithic. Through the interpretation of images and symbols, she reveals these matriarchal cultures, decoding the symbolic language that has remained embedded in our civilization. Illustrated with nearly 2,000 symbolic artifacts — sculptures, figurines, temple models, frescoes, vases, sacrificial containers — the book establishes the Goddess as the most persistent feature in the archaeological record of the ancient world. A symbol of the unity of all life in nature, her power was in water and stone, in cave and tomb, in animals and birds, in hills, trees, and flowers. Her main functions were life-giving, death-wielding, and regenerative. Gimbutas’s magnum opus takes the existence of goddess-worshiping, earth-centered, egalitarian, and nonviolent cultures out of the realm of speculation into that of documented fact.