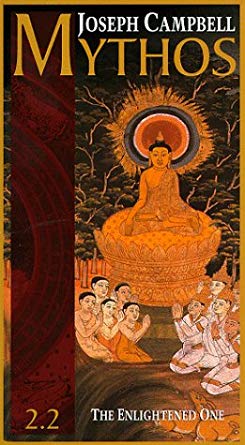 Joseph Campbell’s exhilarating story-telling and masterful teachings continue in this second volume on the One Great Story of our human adventure. Journey with this remarkable man as he takes you through The Shaping of The Eastern Tradition.

Campbell uses stories of the Buddha’s life and enlightenment to reflect the essence of the Buddhist religion. He explains the difference between the two principal types of Buddhism–Theravada (Hinayana) and Mahayana. Campbell also probes the differences between Eastern and Western religion by focusing on Buddhism as a religion of “identification with” the divine rather than on of “relationship to” it. He also compares Buddhism with Taoism and Confucianism and explores an ancient collision of East and West.

Review from All Movie Guide: As part seven of the Joseph Campbell’s Mythos series, this video explains the history and origin of Buddhism. Through stories of Buddha’s life and the teachings of other Buddhists, Campbell explains the basic philosophy of Buddhism and identifies its two branches, Theraveda (or Hinayana) and Mahayana. He also compares Buddhism to Taoism and Confucianism, and shows how these traditions became known to the West. Oscar Award winning actress Susan Sarandon hosts. — Ed Atkinson