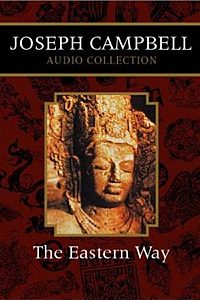 This title is part of the Joseph Campbell Audio Collection series

Authorized by the Joseph Campbell Foundation, here is Volume Three (of Five) in a 40-hour series. These are the key lectures that Campbell kept in his study and used as the basis for later lectures on myth, symbolism, and spiritual awakening. Provocative and exhilarating, full of wit and wisdom, they are windows into one of the greatest minds of our time.

Lectures from this collection are available in print as chapters in Myths of Light: Eastern Metaphors of the Eternal.

In this talk, Joseph Campbell explores an extraordinary difference between western belief systems and the widsom of the Orient: In the West, there is an emphasis on our forebears’ exile from the Garden of Eden and, hence, on our separation from God; in Oriental mythic traditions, however, there was no exile and, moreover, one can never be separate from God, because God is within every soul. Problems of alienation arise only when one has not opened up to a realization of the God consciousness within them.

The Mystical Traditions of India

Joseph Campbell was fascinated by the various forms of yoga, traditional Indian spiritual practices that use meditation, physical exercises, and special breathing techniques to turn an individual’s focus to an inward path. In this talk, he surveys several yogic traditions: the rigorous Kundalini Yoga; Jana, or “philosophical,” Yoga; and Karma Yoga, the yoga of action. While extreme psychophysiological exercises such as those of Kundalini Yoga might not be appropriate for everyone, he argues, each of us can shape our personal karmic destiny through the practice of one or another form of yoga.

Joseph Campbell begins his discussion of the rich mythology of Hinduism by noting that it is an ethnic religion: one is born Hindu; by contrast, a person becomes a Buddhist, a Moslem, or a Christian. Hinduism is, therefore, deeply connected with the soil and soul of India, and its relationship to Buddhism is quite similar to Judaism’s relationship to Christianity.

…is one of the three world religions–the others being Christianity and Islam–into which one is not born, but rather converts or professes. In this talk, Joseph Campbell humbly argues that Buddhist doctrine is, in many ways, the supreme expression of religious techique; for, unlike Christianity, Buddhism is a psychological system. Campbell then surveys the Buddha’s life, describing the crisis that led to his illumination under the Bo tree. Directing our attention to fundamental similarities between the mythological symbols of Buddhism and those of Christianity, he observes: “In the Christian tradition, we find Jesus on a cross; and this cross is also the tree of immortal life, and he is the fruit of that tree. Jesus on the cross, Buddha under the tree–these are the same figures.”

In this exploration of the ways in which the concepts of Oriental mythology are traditionally rendered, Joseph Campbell begins by observing that, in the Orient as elsewhere, all forms of creative expression can be ranged along a continuum: at one extreme, are representational forms, such as portrait painting or sculptures of Buddha, which have an iconographic function. At the other extreme, are more abstracted depictions, such as brush-stroke calligraphy, which seek to express man’s transcendental relationship to nature.