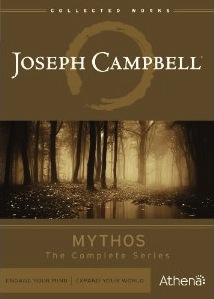 “Myth comes from the same zone as dream . . . from the great biological ground, whatever it may be. They are energies and they are matters of consciousness.” – Joseph Campbell

During the final years of his life, Joseph Campbell embarked on a speaking tour in which he drew together all that he had learned about what he called the “one great story” of humanity. These remarkable talks were filmed and are presented here in the order and manner in which Campbell himself intended, with enhanced images and in minimally edited form.

This series is made up of fifteen hours of talks that Campbell himself believed summed up his views on “the one great story of mankind.” Finally complete, and offered for the first time as a boxed set, here is Campbell’s vision of human myth, presented in all its glory.

Mythos: Vol. 1, The Shaping of Our Mythic Tradition

An exploration of the psychology, history and biology of myth, and an introduction to the Western mythos.

Mythos: Vol. 2, The Shaping of the Eastern Tradition

An introduction to the great mythic traditions of South and East Asia.

Mythos: Vol. 3, The Shaping of the Western Tradition

An exploration of the great philosophy, art and literature that have shaped the modern West.