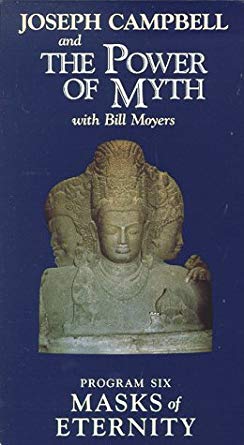 The sixth program of Joseph Campbell and The Power of Myth with Bill Moyers.

See The Power of Myth for more information

Program Six features the fascinating global conceptions of God–the masks of eternity that both cover and reveal the face of glory. This documentary is one of a series of conversations recorded for PBS between Joseph Campbell and Bill Moyers. Journalist Moyers plays host, and facilitator to Campbell, the noted authority on world myths. Campbell made his life’s work noting the similarities in myths and traditions the world over. He maintained that this showed a common psychological and spiritual ground from which all human life sprang forth. This episode looks at the concurrent themes in the world’s religions. The beliefs of Native Americans, Christians, Jews, Buddhists, Sufis, and others are discussed in this enlightening video. ~ Rose of Sharon Winter, All Movie Guide