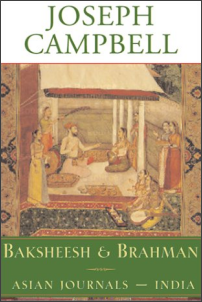 This title is part of the Asian Journals series

Joseph Campbell was one of the foremost interpreters of myth in our time. Yet when he traveled to Asia for the first time he was nearly fifty and at a crossroads in his life and career. This journal of those transformative six months in India is as close as Campbell ever came to writing an autobiography. After ten years’ intense study of Indian art and philosophy, Campbell embarked on this long-postponed journey. Searching for the transcendent (Brahman)—the exotic mysteries of the India in his books—he found instead stark realities: growing nationalism, cultural and religious rivalry, poverty, the impact of foreign aid, and a culture of what he called “”baksheesh;”” or alms. This carefully kept journal chronicles the disillusionment and revelation that would change the course of his life and studies. It is at once a diary of his adventures—including his personal photos—a forum in which he develops, his revolutionary ideas and clarifies his future pursuits, and a record of his insightful discussions of art, philosophy, and transcendent realities with Indians from every level of society. Baksheesh and Brahman superbly illustrates Campbell’s working method and grants a look at the thoughts and experience of an incredible mind. NOTE: This book was re-released in hardcover in the fall of 2002, along with the first edition of its companion volume, Sake and Satori: Asian Journals—Japan. 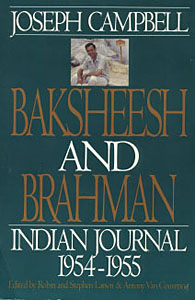