In the Footsteps of Joseph Campbell – France, Summer 2019 – Romance of the Grail with Evans Lansing Smith

You know about the Grail Quest of Indiana Jones and Robert Langdon, but did you know that both characters found inspiration in Joseph Campbell? And did you know Joseph Campbell led Grail Quests himself? Evans Lansing Smith, who traveled with Campbell and now chairs the Ph.D. in mythological studies at Pacifica Graduate Institute, has revived the journey! From the Arthurian legends of Perceval to the contributions of Thomas Mann and T.S. Eliot, join Dr. Smith on this epic adventure! 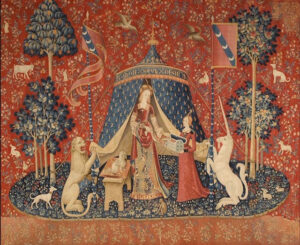 The second in a series of Mythological Studies Tours, this trip takes us to the marvelous sites in Northern France associated with the Grail Romances of the Middle Ages. From our base in Rennes, the capital of Celtic Brittany, a series of day trips will take us to the stunning site of Mont-Saint-Michel, following which we journey into the interior of Brittany to explore the legendary Forest of Brocéliande, birthplace of Vivian, haunting domain of Morgan le Fay, and final resting place of Merlin. We then journey farther back in time to the megalithic Avenue of the Druids, along the far western coast of Carnac. In the Loire River Valley, we stop over to visit the formidable 13th century Château in Angers, to see the splendid Apocalypse Tapestries—the finest of the Anglo-Norman Middle Ages—before traveling to Chartres to explore the most famous of all cathedrals, with its Neolithic crypt, Black Virgin, and gorgeous labyrinth. From Chartres we move on to Paris, home of the magical Unicorn Tapestries, at the Musée national du Moyen Âge (formerly Musée de Cluny), and of the numinous cathedral of Nôtre Dame, and the fabulous Medieval wing of the Louvre. Your guide along the way will be Dr. Evans Lansing Smith, who travelled along the same route with Joseph Campbell, over forty years ago, in 1976. He will offer a series of reflections on that that journey, along with illuminated presentations focusing on the mythologies of France, from the Megalithic period to the Middle Ages.

Dr. Evans Lansing Smith, Ph.D., is core faculty and Chair of the Mythological Studies Program at Pacifica Graduate Institute. In the 1970s, he traveled with Joseph Campbell on tours of Northern France, Egypt, and Kenya. He has taught at colleges and institutes in Switzerland, Italy, France, Maryland, Texas, and California, and is the recipient of awards for distinguished teaching from Midwestern State University in Texas and Pacifica Graduate Institute. His Ph.D. is from The Claremont Graduate School, he has an M.A. in Creative Writing from Antioch International and a B.A. from Williams College. He is the author of thirteen books (including two books of poetry) and numerous articles on comparative literature and mythology. He has given presentations for the C.G. Jung Institutes in Küsnacht and New York City, the Seattle and San Diego Friends of Jung, the Modern Language Association, the American Association for the Study of Popular Culture, the Retreat Center at the Pacifica Graduate Institute, the Ojai Writer’s Conference, and the Casa dei Pesci in Circeo San Felice, Italy. He is the editor of two volumes in The Collected Works of Joseph Campbell: The Romance of the Grail: The Magic and Mystery of Arthurian Myth was published in 2015 and Joseph Campbell Correspondence: 1927-1987, forthcoming in January of 2019.

For complete information, itinerary, and registration, visit www.tonidanca.com or contact Toni D’Anca at tonidanca@icloud.com or 805.455.9941