The Myth of the Goddess: Evolution of an Image 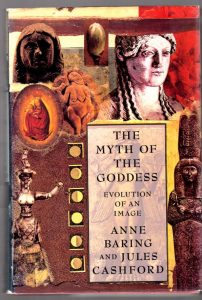 The authors of this ground-breaking, rich, ambitious work attempt to trace the evolution of consciousness by following humanity’s changing attitudes toward female deities, from the Paleolithic mother goddess enshrined in figurines to Inanna of Sumer, Isis of Egypt, Aphrodite of Greece, and beyond. Baring, a London-based Jungian analyst, and Cashford, who writes on mythology, regard the formal disappearance of goddess myths as a pivotal event signaling the devaluation of the feminine and the opposition of feeling to thinking. They interpret the Virgin Mary as the unrecognized mother goddess of Christianity, identify hidden images of the goddess in the Old Testament and demonstrate that a Hebrew goddess existed in various forms such as the Shekhinah, founder of the world in Kabbalism. A wonderfully readable synthesis, this monumental study is packed wth scores of riveting illustrations. It will serve as a sourcebook for students of myth, feminists and those seeking to balance and integrate masculine and feminine components of their psyche.