The Marriage of Cadmus and Harmony 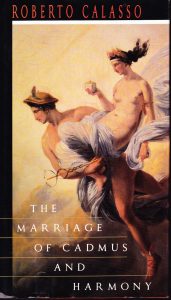 Already an international literary event, and translated into a dozen languages, The Marriage of Cadmus and Harmony is a book without any modern parallel. Forming an active link in a chain that reaches back through Ovid’s Metamorphoses directly to Homer, Roberto Calasso’s reexploration of the fantastic fables we may think we know explodes the entire world of Greek mythology, pieces it back together as it once must have been, and presents it to us in a new astonishing, and utterly contemporary way. “But how did it all begin?” The eternal question that Man has always asked of his universe also forms the opening words of this book. In answer, and in the voice of the born story-teller (all erudition, all interpretation is hidden in the folds of his dazzling narrative), Calasso leads us through the maze, back to the time when the gods were not yet born from the original coupling of Uranus and Ge, Mother Earth; then forward again, all the way to the death of Odysseus, which marks the end of the age of heroes; and – most important of all – to the marriage of Cadmus and Harmony, the last occasion when the gods sat down at a feast with mortal men. That day began a chain of calamities, a streak of blood that parted earth from Olympus forever. What was left – Cadmus’s parting gift to men – was the alphabet, and from it both history and poetry, and so our world, were born. Yet the world of myth is not dead – it is present now as it was in the time of Homer. The most dangerous event since the beginning of time has been the gods’ discovery of us, their Olympian fascination with these human creatures that led them first to invade our world, then to assume human form for their own purposes and their ownterrible games. The consequences of that fascination are the extraordinary encounters that we know as the myths – the great, hypnotic, erotic, often contradictory stories that Calasso walks us back into as if they are some vast, half-ruined palace we had forgotten we owned. At the end, the gods abandoned the world. But the multifaceted psychology of modern man and his atemporal sense of time have brought him closer than ever to the mythic condition. And as the author reminds us, the gods – now as then – do not ask to be believed; they ask only to be recognized. “These things never happened, but they are always”. Roberto Calasso’s book transforms our relationship to the wellsprings of our culture.”