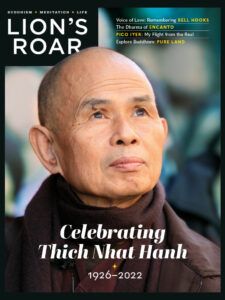 An elegant, articulate magazine devoted to matters pertaining to Buddhism, meditation, and culture. Past winner of UTNE Alternative Press Award.

Over the past three decades, the Lion’s Roar (formerly known as the Shambhala Sun) has evolved from a community newspaper, to a small young magazine, to the largest-circulation Buddhist magazine in the English language. Much has changed within the pages of the magazine and on our website as we’ve worked to reflect the full range of Buddhist traditions and the diversity of practitioners today. As Buddhism in the West has grown, matured, and diversified, we have too.

As of the February–March 2016 issue, the new title of this magazine is Lion’s Roar. This name, recognized by Buddhists of all traditions, expresses our long-standing mission to support genuine Buddhism in the West in all its forms and to offer the dharma to everyone who would benefit from it.

The lion’s roar was the Buddha’s own metaphor for the fearless proclamation of the truth of the dharma. It reflects our aspiration to be a fearless and powerful voice for Buddhism in our society. The mission of Lion’s Roar is to offer, as our slogan says, Buddhist Wisdom for our Time : to bring genuine dharma in all its forms to everyone who may find value in it, in a voice that speaks to all, in the best medium for each individual need.