The Empty Space: A Book About the Theatre: Deadly, Holy, Rough, Immediate 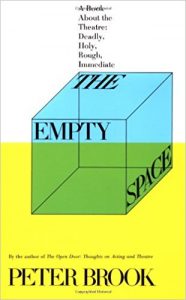 Peter Brook’s career, beginning in the 1940s with radical productions of Shakespeare with a modern experimental sensibility and continuing to his recent work in the worlds of opera and epic theater, makes him perhaps the most influential director of the 20th century. Cofounder of the Royal Shakespeare Company and director of the International Center for Theater Research in Paris, perhaps Brook’s greatest legacy will be The Empty Space. His 1968 book divides the theatrical landscape, as Brook saw it, into four different types: the Deadly Theater (the conventional theater, formulaic and unsatisfying), the Holy Theater (which seeks to rediscover ritual and drama’s spiritual dimension, best expressed by the writings of Artaud and the work of director Jerzy Grotowski), the Rough Theater (a theater of the people, against pretension and full of noise and action, best typified by the Elizabethan theater), and the Immediate Theater, which Brook identifies his own career with, an attempt to discover a fluid and ever-changing style that emphasizes the joy of the theatrical experience. What differentiates Brook’s writing from so many other theatrical gurus is its extraordinary clarity. His gentle illumination of the four types of theater is conversational, even chatty, and though passionately felt, it’s entirely lacking in the sort of didactic bombast that flaws many similar texts.–John Longenbaugh