The Alphabet Versus the Goddess: The Conflict Between Word and Image 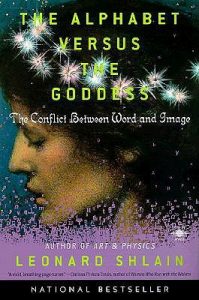 “Literacy has promoted the subjugation of women by men throughout all but the very recent history of the West,” writes Leonard Shlain. “Misogyny and patriarchy rise and fall with the fortunes of the alphabetic written word.”

That’s a pretty audacious claim, one that The Alphabet Versus the Goddess provides extensive historical and cultural correlations to support. Shlain’s thesis takes readers from the evolutionary steps that distinguish the human brain from that of the primates to the development of the Internet. The very act of learning written language, he argues, exercises the human brain’s left hemisphere–the half that handles linear, abstract thought–and enforces its dominance over the right hemisphere, which thinks holistically and visually. If you accept the idea that linear abstraction is a masculine trait, and that holistic visualization is feminine, the rest of the theory falls into place. The flip side is that as visual orientation returns to prominence within society through film, television, and cyberspace, the status of women increases, soon to return to the equilibrium of the earliest human cultures. Shlain wisely presents this view of history as plausible rather than definite, but whether you agree with his wide-ranging speculations or not, he provides readers eager to “understand it all” with much to consider.