Religion in Human Evolution: From the Paleolithic to the Axial Age 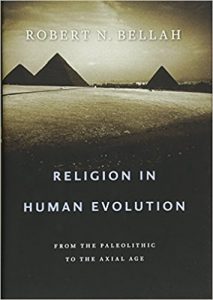 Religion in Human Evolution is a work of extraordinary ambition—a wide-ranging, nuanced probing of our biological past to discover the kinds of lives that human beings have most often imagined were worth living. It offers what is frequently seen as a forbidden theory of the origin of religion that goes deep into evolution, especially but not exclusively cultural evolution.

In this magisterial effort, eminent sociologist of religion Bellah attempts nothing less than to show the ways that the evolution of certain capacities among humans provided the foundation for religion…[Readers] will be rewarded with a wealth of sparkling insights into the history of religion. (Publishers Weekly 2011-08-08)

Bellah’s book is an interesting departure from the traditional separation of science and religion. He maintains that the evolving worldviews sought to unify rather than to divide people. Poignantly, it is upon these principles that both Western and Eastern modern societies are now based. What strikes the reader most powerfully is how the author connects cultural development and religion in an evolutionary context. He suggests that cultural evolution can be seen in mimetic, mythical, and theoretical contexts. (Brian Renvall Library Journal 2011-08-01)

Religion in Human Evolution is not like so many other “science and religion” books, which tend to explain away belief as a smudge on a brain scan or an accident of early hominid social organization. It is, instead, a bold attempt to understand religion as part of the biggest big picture–life, the universe, and everything…One need not believe in intelligent design to look for embryonic traces of human behavior on the lower rungs of the evolutionary ladder. [Bellah’s] attempt to do just that, with the help of recent research in zoology and anthropology, results in a menagerie of case studies that provide the book’s real innovation. Not only the chimps and monkeys evoked by the word “evolution” in the title, but wolves and birds and iguanas all pass through these pages. Within such a sundry cast, Bellah searches for a commonality that may give some indication of where and when the uniquely human activity of religion was born. What he finds is as intriguing as it is unexpected…Bellah is less concerned with whether religion is right or wrong, good or bad, perfume or mustard gas, than with understanding what it is and where it comes from, and in following the path toward that understanding, wherever it may lead…In a perfect world, the endless curiosity on display throughout Religion in Human Evolution would set the tone for all discussions of religion in the public square. (Peter Manseau Bookforum 2011-09-01)

Ever since Darwin, the theory of evolution has been considered the deadly enemy of religious belief; the creation of Adam and Eve and the process of natural selection simply do not go together. In Religion in Human Evolution: From the Paleolithic to the Axial Age, the sociologist Robert Bellah offers a new, unexpected way of reconciling these opposites, using evolutionary psychology to argue that the invention of religious belief played a crucial role in the development of modern human beings. (Barnes and Noble Review 2011-09-14)