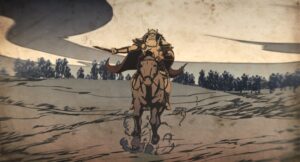 Animated re-tellings of mythological stories can be powerful ways to engage people of all ages in the ancient tales that humankind has been telling for centuries. “The Last Fiction” aims to do just that. A recent review of the film in the LA Times states, “Astonishingly ambitious in breadth, 2-D animated feature “The Last Fiction,” the first such film entirely realized in Iran, refashions ancient Persian mythology into an inventively lyrical and epically exhilarating saga where divine forces battle mystical wickedness. ”

To read more about this new take on Persian mythology, click here.