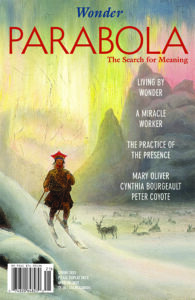 The Society for the Study of Myth and Tradition is a not-for-profit organization devoted to the dissemination and exploration of materials relating to the myths, symbols, rituals, and art of the world’s religious and cultural traditions. To this end, the Society is the publisher of Parabola Magazine.

What is a Parabola?

A parabola is one of the most elegant forms in nature. Every path made by a thrown ball, every spout of water from a fountain, and every graceful arch of steel cables in a suspension bridge is a parabola.

The parabola represents the epitome of a quest. As stated in our first issue, it is “a curving line that sails outward and returns with a new expansion—and perhaps a new content, like the flung net of a Japanese fisherman.” It is the metaphorical journey to a particular point, and then back home, along a similar path perhaps, but in a different direction, after which the traveler is essentially, irrevocably changed.

Parabolas have an unusual and useful property: as in a satellite dish, all parallel beams of energy (e.g., light or radio waves) reflect on the parabola’s face and gather at one point. That point is called the focus. In a similar way, each issue of Parabola has its own focus: one of the timeless themes of human existence.