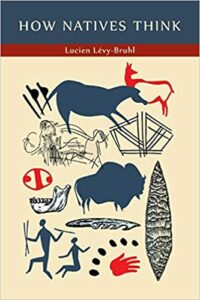 In this work, first published as “Les Fonctions Mentales dans les Societes Inferieures,” Levy-Bruhl speculated about what he posited as the two basic mindsets of mankind; “primitive” and “Western.” The primitive mind does not differentiate the supernatural from reality, but rather uses “mystical participation” to manipulate the world. According to Levy-Bruhl, moreover, the primitive mind doesn’t address contradictions. The Western mind, by contrast, uses speculation and logic. Like many theorists of his time, Levy-Bruhl believed in a historical and evolutionary teleology leading from the primitive mind to the Western mind. Sociologist Stanislav Andreski argued that despite its flaws, Levy-Bruhl’s “How Natives Think” was an accurate and valuable contribution to anthropology, perhaps even more so than better-known work by Claude Levi-Strauss.