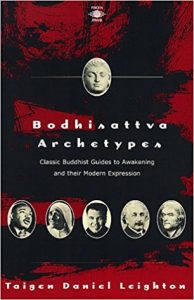 Contemporary Westerners look for spiritual guides to help them find the way to a more wholesome, productive lifestyle, and this fascinating book offers an introduction to a particular kind of guide, the Bodhisattva figures of the Buddhist tradition.

Explaining the psychology of bodhisattva practice, imagery, and imagination, Bodhisattva Archetypes identifies a number of archetypal figures — beings dedicated to the universal awakening or enlightenment of everyone. In language that is subjective and reflective — with fascinating folklore of the Bodhisattva tradition and numerous illustrations of the icons and their sacred sites — Taigen Daniel Leighton introduces readers to recognizable Bodhisattva archetypes, like Maitreya the future Buddha (often depicted as a fat, laughing Chinese figure) as well as contemporary figures who exemplify Bodhisattva ideals, such as Martin Luther King, Jr., Mahatma Gandhi and Henry David Thoreau. These familiar personages from non-Buddhist spiritual traditions reinforce Leighton’s view that the search for spiritual well-being is global, and that, in today’s world, the bodhisattva ideal is a relevant, useful guide.