“One cannot predict the next mythology any more than one can predict tonight’s dream; for a mythology is not an ideology. It is not something projected from the brain, but something experienced from the heart.” 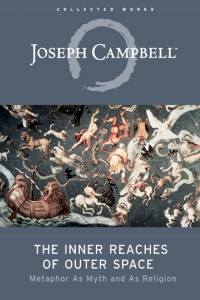 The Inner Reaches of Outer Space

Developed from a memorable series of lectures delivered in San Francisco, which included a legendary symposium at the Palace of Fine Arts with astronaut Rusty Schweickart, this book--the last Campbell completed in his lifetime--explores the space age. Campbell posits that the newly discovered laws of outer space are actually at work within human beings as well and that a new mythology is implicit in this realization. He examines the new mythology and other questions in these essays. Reviews: This book, more than any other, unambiguously delineates his basic understanding of mythology and religion....Inveterate underliners will be tempted to highlight things on virtually every page.— Parabola The wealth and breadth of reference in this small book is truly prodigious ...as Campbell now soars like an eagle to a generalization about The Big Bang, now dives like a hawk to a precise description of the color and number of lotus petals in each of the seven centers of the chakra system, rendering both lucid in a single universe of discourse. — Newsday
Other quotations from this Title

Creation myths, furthermore, which, when read in their mystical sense might bring to mind the idea of a background beyond time out of which the whole temporal world with its colorful populations has been derived, when read, instead, historically, only justify as supernaturally endowed the moral order of some local culture.  [share]

Creation myths, furthermore, which, when read in their mystical sense might bring to mind the idea of a background beyond time out of which the whole temporal world with its colorful populations has been derived, when read, instead, historically, only justify as supernaturally endowed the moral order of some local culture.  [share]

In the Great Seal of the United States the reference is to the inspiration of the light of Reason in the constitution of the originating 13 colonies brought together as one nation: e pluribus unum, “out of many, one.”    [share]

The new mythology is already implicit among us as knowledge a priori, native to the mind. Its images will be derived from contemporary life, thought, and experience, anywhere and everywhere, and the moral order to the support of which they are brought shall be of the unifying culture of mankind.  [share]

Our eyes are the eyes of the earth. Our knowledge is the earth's knowledge.  [share]

We are, in fact, productions of this earth. We are, as it were, its organs. Our eyes are the eyes of the earth; our knowledge is the earth's knowledge.  [share]

As viewed by astronauts from the moon, the Earth lacks those lines of sociopolitical division that are so prominent on maps. And as recognized here below, the web of interlacing socioeconomic dependencies that now enfolds the planet is of one life. All that is required is a general change of vision to accord with these contemporary facts. And that this will occur is certain. It is, in fact, already occurring. Moreover, the vision required is nothing new, nor unnatural. What are unnatural, artificial, and contrived, are the separations.  [share]

"One cannot predict the next mythology any more than one can predict tonight's dream; for a mythology is not an ideology. It is not something projected from the brain, but something experienced from the heart."  [share]

The life of a mythology derives from the vitality of its symbols as metaphors delivering, not simply the idea, but a sense of actual participation in a realization of transcendence, infinity, and abundance.  [share]

Indeed, the first and most essential service of a mythology is this one, of opening the mind and heart to the utter wonder of all being. And the second service, then is cosmological: of representing the universe and the whole spectacle of nature, both as known to the mind and as beheld by the eye, as an epiphany of such kind that when lightning flashes, or a setting sun ignites the sky, or a deer is seen standing alerted, the exclamation 'Ah!' may be uttered as a recognition of divinity.  [share]

The old gods are dead or dying and people everywhere are searching, asking: What is the new mythology to be, the mythology of this unified earth as of one harmonious being?  [share]

The artist . . . is the true seer and prophet of his century, the justifier of life and as such, of course, a revolutionary far more fundamental in his penetration of the social mask of his day than any fanatic idealist spilling blood over the pavement in the name simply of another unnatural mask.  [share]

In the way of nature one may experience, from time to time, glimpses of the world in this [transcendent] light – after the pelvic bioenergetic commitments have been honored and fulfilled, so that, freed from the dictatorship of the species, one is released to live as an individual (some little time, say, after the age of about thirty-five).  [share]