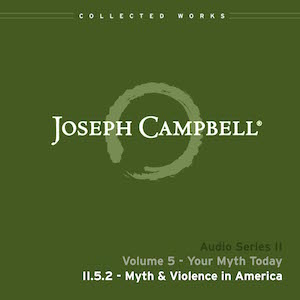 A movement from what Spengler called culture to civilization … is marked by revolutions and radical transformations of culture, where everything that had been natural became a problem, intellectually considered, criticized, and taken apart. And he equates the terminal period of the revolution age with our period and with the Hellenistic period, after which you have the rise of the Roman Empire, the Caesars, and the second religiousness. This dawn period in Spengler’s view – and I think he demonstrates it very clearly – is characterized by the emergence of an architecture profoundly inspired in a religious sense, which gives the pitch, which gives the tone and sign that is to be developed then, through a period of about a thousand years in history, of the ensuing culture form. — Joseph Campbell

As the debate rages about what to do with the violence in America that ranges from guns to terrorism, domestic violence to child abuse, Joseph Campbell compares various cultural stages, offers different view points, and shares his views on mythic thinking in this world. He also discusses recent travels through Switzerland, Italy, Germany and France, comparing those cultures with his life in New York City.

This lecture was recorded at the Diablo Valley College, Pleasant Hill, CA in 1975