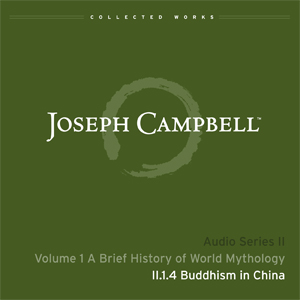 I suppose if you were to try to invent two peoples at opposite poles of any spectrum you chose, Chinese and Hindus would be perfectly good candidates for the opposition. […] Think of the Indian world, the jungle and the heat, and the vegetal emphasis in the environment. And then the Chinese in the realms of the deserts and the animal world, and a background of nomadism and the hunt. The Indians loving wild, vast imaginations. And the Chinese: very practically oriented. —Joseph Campbell

In this talk, Joseph Campbell continues his exploration of the world’s great mythological traditions by exploring the mythologies of China, starting with the indigenous traditions, Confucianism and Taoism, and then continuing to discuss the way in which China’s particular mythic culture took in the Indian tradition of Buddhism and transmuted it into something new and uniquely East Asian.