Confrontation of East and West in Religion (Audio: Lecture I.2.3) 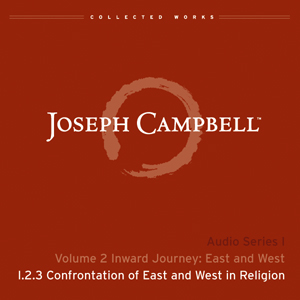 Confrontation of East and West in Religion (Audio: Lecture I.2.3)

Just as for the American Indian the buffalo dropped away, and with it their public social mythology, so for us: the world has moved past, and our mythology has dropped off, and we are turned inward, and [the gurus and zen masters] are the ones who are teaching us how to turn inward in this adventurous quest of finding again those images in ourselves which the society can no longer render to us. — Joseph Campbell

Observing that the “West” is increasingly disenchanted with traditional religious beliefs and practices, Campbell argues that the time is ripe for the cross-fertilization of Eastern and Western cultures. He presents an illuminating analogy to our present situation in the plight of the Plains Indians near the end of the nineteenth century when the old ways were disappearing with the buffalo and their old wisdom was no longer effective. For Campbell, the response of these people of the Plains is a vivid metaphor for what modern people must do. Their adoption of the peyote religion encouraged inward visionary experiences and was an example of how a people can find the sacred even when it has been lost to the society.