MythBlast | The Rules of Enchantment

As we at the Joseph Campbell Foundation wrap up our celebration of the month of September with the theme of Timeless Tales, I want to return to an exploration of the Grail Romances and the relevance these stories have to the challenge of living a contemporary life. In Wolfram’s Parzival, the grail is described as “a stone vessel brought down from heaven by the neutral angels” (Joseph Campbell, p. 51, Goddesses: Mysteries of the Feminine Divine).

Campbell also discusses the symbolic significance of this act in Romance of the Grail: The Magic and Mystery of Arthurian Myth). The neutral angels refused to participate in the heavenly war between God and Lucifer and thus, symbolically, they and their neutrality represent the transcendent principle, the function of which is to reconcile pairs of opposites. Read this way, the grail and its various narratives are seen not simply as the search for a priceless relic, but rather as an effort to move towards a profoundly life-affirming ideal culminating in healing and wholeness, not just limited to the individual, but extending outward to others and to the world itself. It is a union of the spiritual, the psychic, and the physical; it is the phenomenon that C.G. Jung described as the coniunctio.

The knights-errant who rode forth seeking the grail didn’t ride under the banner, Amor, as was the habit of the suffering Grail King Amfortas. Amor is a tricky thing: it is often convention masquerading as freedom, infatuation posing as love, a frequently ecstatic projection that leads one unavoidably, at some point, into wounded, impotent grief. Knights-errant striving to attain the grail labor toward an ideal of chivalry which, contrary to the ecstatic rapture of Amor, exposes them to difficulties, trials, and suffering, the very experiences that prepare them to apprehend the sublime. Chivalry may well be the generative, procreative quality of the heart, and it gives birth to individual expressions of courage, nobility, mercy, curiosity, patience, and charity. Chivalry expressed as the action of living lifts the veil of quotidian life to reveal an enchanted world, a world of mystery, of wonder, a world of meaning, a world of soul.

There are people mentioned in the grail romances who lack the ethos of chivalry, and thus lacking, lack what the grail represents. They live fine, probably even honorable lives as clergy, merchants, farmers, fishmongers, servants, husbands, wives, and children. They, in all likelihood, are not aware that the world in which they work, play, live, emote, speculate on, laugh about, and die in, is enchanted. All they know of the world are its instinctual pleasures and its unpredictable terrors. For them the world is often harsh, nasty, and short; they commend their souls to God and let fortune do what it must to them, for God and fortune are all they have to rely upon. For them, it’s inconceivable to operate in and on the world with anything resembling individual agency because human agency relies upon the qualities of chivalry. Agency knows the value of risk, of effort, of imagination, and dignity; all those qualities that teach us that breathing is not the same thing as living.

The only chance one has of finding the grail—or finding that which the grail represents—is through the living of a life predicated on the values of chivalry. Now before you scoff at the notion of chivalry as an antiquated, old-fashioned, straightened notion that contemporary people can disregard, what if I told you that chivalry is not merely a way of life, it is a science? In fact, in his famous paper on phenomenology, Don Quixote and the Problem of Reality, Alfred Schütz calls chivalry “the queen of all sciences.” Chivalry, Schütz argues, encompassed all or most of the sciences in the world at that time: the knight-errant had to be an expert in criminal and civil law, a theologian, a healer: both physician and herbalist, an economist, an astronomer, an athlete, an artisan who could shoe a horse, mend a saddle, or repair weapons and armor as the need arose. Above all the knight-errant had to be a philosopher, one who knew and defended truth, while simultaneously understanding that such a defense might well cost him everything, even his own life. In contemporary life, some will see such individuals and identify them as renaissance hominum, renaissance individuals, while many others will probably call them fools. But, it was said of Don Quixote, and it is no less true of ourselves: that one may live as a fool and yet die wise. 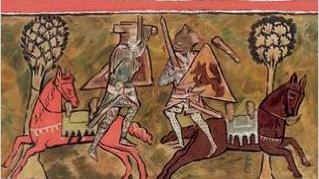 MythBlast | The Rules of Enchantment