Our theme at the Joseph Campbell Foundation this month is gratitude. We are celebrating both Campbell’s ideas and works, and all of the people around the world who have brought their own particular genius to the ongoing relevance and understanding of mythology. 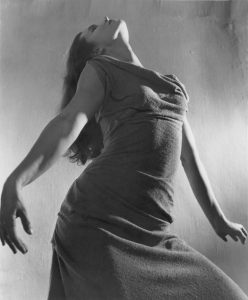 As you may know, Campbell spent almost fifty years married to one of the pre-eminent dancers of the 20th Century, Jean Erdman. Together, they created the Theater of the Open Eye, a home for dance and theater pieces that celebrated the intersections of myth and the performing arts.

We are thrilled to announce a brand new book from our publishing partners at New World Library: Ecstasy of Being, a collections of essays written by Campbell on mythology and dance.  It’s edited by Nancy Allison, a choreographer, dancer and longtime creative collaborator of Jean Erdman’s, who is the founding Artistic Director of Jean Erdman Dance.

As a former dancer, in gratitude to artists who keep myth alive in richly powerful ways, I’d like to share this excerpt from the chapter “The Jubilee of Content and Form”:

What do we learn? Well, we learn that over the entire inhabited world, in spite of many colorful and distracting variations of nomenclature and costumes, the episodes and personages of myth, legend, fairytale, and fable remain, and have remained throughout all time, essentially the same. Also we learn that these mysteriously constant personages and episodes are precisely those that have been upsetting or delighting us in our personal fantasies and dreams. Oedipus and Orestes, the Sun Bird and the Serpent are known not only to the scholar’s study but also to the lunatic asylum and the nightly pillow. Mythology, in other words, is not an outmoded quaintness of the past, but a living complex of archetypal, dynamic images, native to, and eloquent of, some constant, fundamental stratum of the human psyche. And that stratum is the source of the vital energies of our being. Out of it proceed all the fate-creating drives and fears of our lives. While our educated, modern waking-consciousness has been going forward on the wheels and wings of progress, this recalcitrant, dream-creating, wish-creating, under-consciousness has been holding to its primeval companions all the time, the demons and the gods.

Apparently, then, the archetypal figures of myth undercut the rational interests of our conscious life, and touch directly the vital centers of the unconscious. The artist who knew how to manipulate these archetypes would be able to conjure with the energies of the human soul. For the symbols are as potent as they ever were. The artist who really knew their secrets might still play the magician—the priest of the potent sign—working marvels purging the community of its pestilential devils and bringing purity and peace. Only, we should tend to explain his effects in psychological rather than theological terms: the heavens and hells being now reinterpreted as chambers of the unconscious.And we should revere him no less than he was revered in the days of yore, when his poems conjured thunderheads and his dances moved the spirits of the soil. (pp 18-19, The Ecstasy of Being)

I hope that your “educated, modern waking-consciousness” has a chance to find this mythological power in the art that you encounter this week.