MythBlast | The Dark Light of the Goddess

I love those moments in which Joseph Campbell, the world-class scholar of myth, also becomes a story-teller, often drawing a line of Native American wisdom. In The Flight of the Wild Gander, he opens the chapter on “Mythogenesis” with a Sioux folktale to introduce us into the mysterious “center” of all mythological traditions:

Early one morning, long ago, two Sioux Indians with their bows and arrows were out hunting on the North American plains; and as they were standing on a hill, peering about for game, they saw in the distance something coming toward them in a strange and wonderful manner. When the mysterious thing drew nearer, they perceived that it was a very beautiful woman, dressed in white buckskin, bearing a bundle on her back, and one of the men immediately became lustful. He told his friend of his desire, but the other rebuked him, warning that this surely was no ordinary woman. She had come close now and, setting her bundle down, called to the first to approach her. When he did so, he and she were covered suddenly by a cloud and when this lifted there was the woman alone, with the man nothing but bones at her feet, being eaten by terrible snakes. “Behold what you see!” she said to the other. “Now go tell your people to prepare a large ceremonial lodge for my coming. I wish to announce to them something of great importance.” (Flight, 57-58)

Although later the mysterious woman reveals her teaching using mandala symbolism, the ultimate secret she bears is her very presence as a sexual being. It is indeed the secret of sexuality itself in its connection with death that seems to be the core of her wisdom. Isn’t the dark connection between sexuality, death, and wisdom one of the biggest secrets there is?

The archetypal image of the goddess laying on top of the dead bones of man immediately conjures the Hindu goddess of death, Kālī, who is the bearer of the sacred śakti of feminine sexuality and creativity. She is often pictured as a dancing figure over the dismembered corpses of men, herself wearing a sacrificial skirt of mutilated arms and a gruesome collar of heads and other body parts.

From a psychoanalytic perspective, it is abundantly clear that the message of “great importance” that the mysterious feminine figure wants to convey is not an ideology or belief system, nor is it the revelation of a “higher meaning” above ordinary life. The mystery is the very presence of the sacred feminine in the midst of the hunt for wisdom.

Staying close to the mythic image, the Goddess immediately represents the fundamental unity of sexuality and death at the core of the human psyche—the two fundamental psychic forces postulated by Freud—which may lead a new hunter for truth to ask with Nietzsche: “Supposing that Truth is a woman—what then?” (Beyond Good & Evil, Preface).

We need to emphasize the fact that the image of the alluring Goddess belongs with that of the hunters—a connection which makes Campbell resort to the parallel myth of Actaeon and Artemis for further elucidation of the Sioux legend. In both cases, the hunter and the hunted belong to the same archetypal complex, a moment of mythological self-reflection, which depicts the primordial encounter of the soul with itself as the event of “the naked” Truth.

Thus the Intellect as Hunter, looking for an “object of knowledge,” runs into the figure of the sacred feminine by sheer accident. Rather than game for objective research, however, she appears as a mythic image that brings the mysteries of eros and death into a single apparition. At this ultimate stage of self-revelation, we are no longer interested in meaning per se. Conversely, the threat of meaninglessness, the fear-mongering of the Void, no longer affects us. As Campbell wrote of the function of art in general, the point of myth is “to render a sense of existence, not an assurance of some meaning […]” (Flight, 151). Campbell also understood that ultimately:

[…] the objective is to be born from the womb of myth, not to remain in it, and the one who has attained to this “second birth” is truly the “twice born,” freed from the pedagogical devices of society, the lures and threats of myth, the local mores, the usual hopes of benefits and rewards. (Flight, 38 — emphasis added)

The true purpose of metaphysics, then, is to transcend the need for metaphysical meaning itself; it is to be released into the arms of the Goddess, the Lady of our dismemberment, in a primordial experience of our material immortality, an experience afforded by the mystery of sexuality and death. For She brings the excitement of Eros with the becoming of death—both symbols without Meaning—in a material image of the being that simply is in the generation of its disappearance. 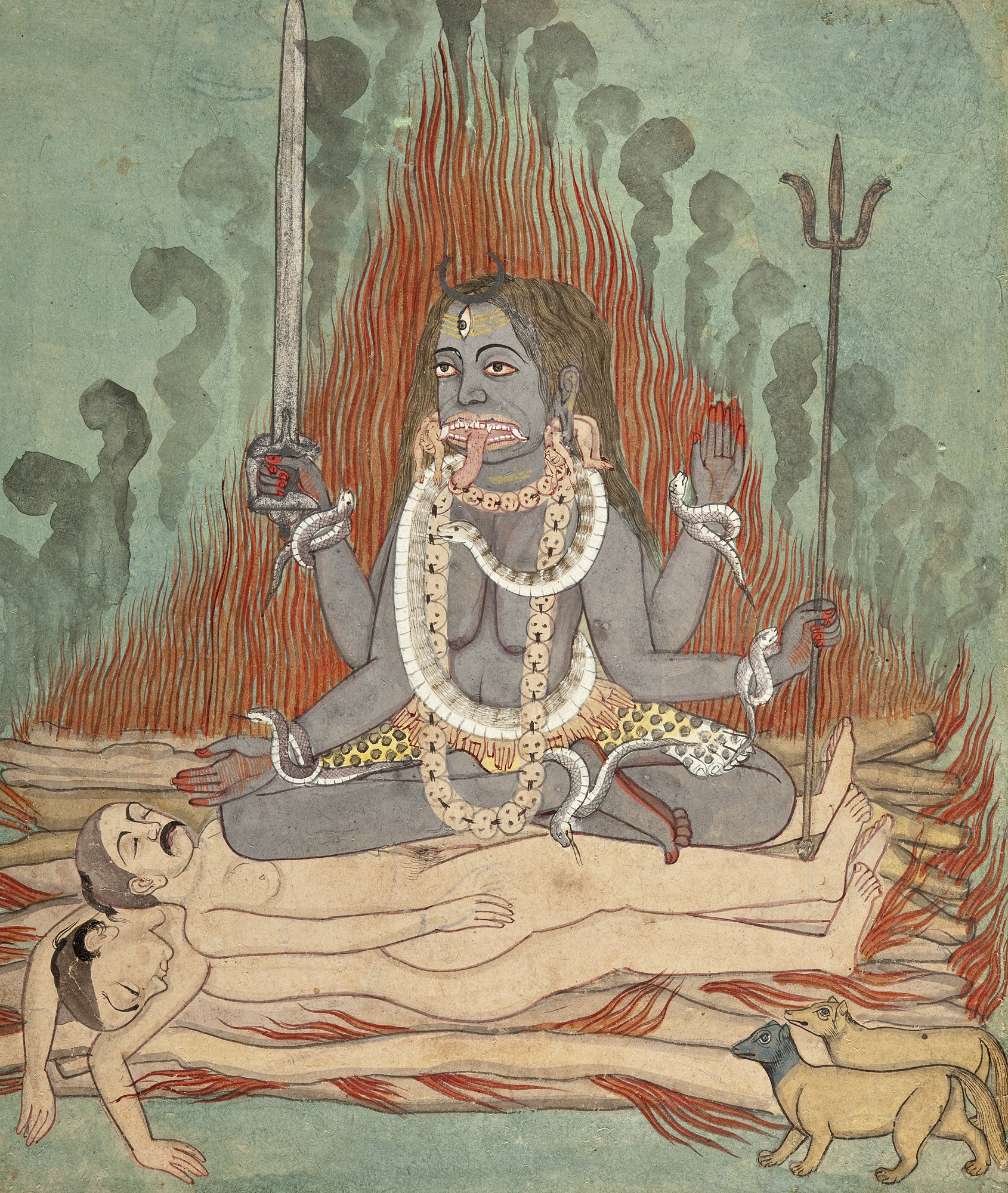 MythBlast | The Dark Light of the Goddess