Scars are curious things given an even more curious name: the word scar is derived from the Greek word eschara, meaning “place of fire.” The word does not mean “caused by fire,” nor does it mean that scars are the result of exposing one’s skin to fire, although there is a connection to the Latin word for scab. No, scar means quite literally the place of fire: the fire is found within the scar and the scar is already present in the fire. Perhaps its derivation has to do with the sensation of intense, searing pain, the kind of pain borne by the body at the receipt of a wound, a wound on fire with pain, and deep enough to create scarring.

The most familiar English usage defines a scar as a mark left on the skin after a surface injury or wound has healed. Scars commemorate and memorialize. They freeze time, space, and emotion in pale, sometimes jagged and awkwardly knitted lines on the skin, and not infrequently, they leave a jagged signature upon the heart as well. And even though there is no apparent etymological relationship between them, one can’t resist adding an “e” to scar, to create the word scare. A scary encounter leaves scars, even children know that. Intense fear–being scared to death for instance–leaves its deeply etched mark upon the mind even though the frightening event has long since passed. In fact, it is often the scar no one else can see that is the hardest to bear.

Scars also serve as a means of identification: if one ever has the misfortune of being booked into jail, one of the questions that will be asked of you is whether you have any birthmarks, tattoos, or scars. Scars are an ancient way of tendering or proffering one’s identity. One of the most poignant accounts of recognition and identification may be found in Book XIX of The Odyssey, when the disguised Odysseus (transfigured to look like an old, decrepit beggar by Athena) is given a bath by his old nursemaid, Eurycleia: as she begins to bath him, she recognizes the scar on his thigh, received as a small boy when he was gored by a boar, and through her recognition of the scar, identifies Odysseus himself. Her eyes fill with tears of mixed grief and joy as she clutches him by his beard and calls him her “dear boy.” For he who was dead is alive again and he, himself lost, is found.

For the lover longing for the beloved, the scar is a welcome affirmation of the beloved’s presence. The scar is an inseparable part of the beloved herself, and any sight of it ipso facto incarnates the beloved; so much so, in fact, that the scar may become as much an object of love as the loved one herself. Writing of Christ’s scars in his book, The City of God, St. Augustine expresses a similar sentiment when he says that they (Christ’s scars) will not “be a deformity, but [have] a dignity in them; and a certain kind of beauty will shine in them, in the body, though not of the body” (City of God, Book 22, Ch. 19).

This is an essential idea to take note of, and it bears repeating that the body does not manufacture the beauty shining in and through the scars, in fact the body is not, in and of itself, beautiful; the body is a most imperfect vessel. If the body does not produce the beauty, then what does? Beauty is, in fact, created by a powerful alchemy involving a scarring wound, a loving gaze, and a precious foundling, all culminating in a moment of poetry and illumination. Love is transformed from an abstract, vaguely meaningful word into a living, breathing, human experience promising answers to all life’s insoluble riddles (It is worth pointing out that wounds, particularly lacerations, to the body often assume the shape of a mouth. Perhaps the word cannot become flesh without inflicting a wound; in other words, creating a mouth which has something to say.)

The scar and its shadow are made deeper and darker by attempts to recoil and hide from them, and one’s anguish is compounded as the attempts to conceal one’s scars inevitably fail, until finally, one wears one’s scars as a symbol of everything corrupted, debauched, perverted, and subverted within. Nothing emanating from such an internal state can help but be grotesquely and tragically flawed, and so, witches, demons, trolls and monsters are frequently described as having ugly, terrifying scars.

Whenever two previously unrelated things are joined together a scar, or a seam if you will, is always the result; and when individuals are joined to previously unknown and unconscious aspects of themselves, scarring is the painful and inescapable result. It can only be ever thus: only when one is faced with something overwhelming can the archetype of wholeness be constellated. So do not be ashamed of scars. Valorize them; caress them; trace their course in your skin and in your mind’s eye. Scars are roadways drawn onto maps of flesh, leading always to the beautiful truths buried deep within oneself. 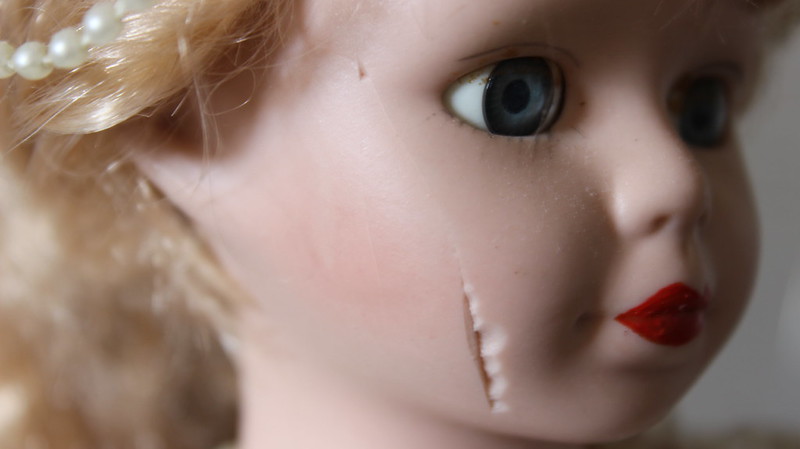