When Penelope tells her story to the stranger, who is Odysseus in disguise, she reveals how the loom strategy she used to keep the suitors at bay came from a divine source: “A god from the blue it was inspired me….” (Homer, The Odyssey, trans. Robert Fagles, p. 394) So Penelope set up a great loom and for four years wove daily a shroud for Laertes, and each night unraveled what she had woven.

Penelope’s weaving, a gift of the goddess Athena, is a motif that bears multivalent meaning in The Odyssey. For one, it can be understood in relation to the poetic narrative of the epic, as any great story is a tale woven into form employing words like threads. We can also think about the weaving motif in relation to Odysseus who is trying to make his way home and is thwarted at various times by Poseidon, and even his own crew, and literally goes backwards, farther away from Ithaca than before — ‘weaving’ his way home.

Whereas the epic treats Odysseus’ many adventures on his journey home, Penelope is on her own journey if we look at her weaving in a certain way. Perhaps the current circumstances of our Covid-19 world—confined movements, limited outward excursions and contact with others—give us an insight into Penelope’s style of journeying. Unlike Odysseus who spent years on distant shores, from the battlefield of Troy and Calypso’s sweet scented island, to sailing through foreign seas meeting exotic people and strange creatures, Penelope was home. Her movements were free within the confines of the domestic sphere and her whereabouts familiar—the same faces, same food, same views.

Yet, she traveled far. Her weaving was the journey through time to the present moment when Odysseus returns. By going back and forth over the vertical threads with her shuttle she wove her way forward. In undoing those very threads each night, she could weave herself onward again. Undoing and doing, unraveling and raveling, this rhythm carried her on, day after day. Her fingertips traveled a thousand thread leagues. Haven’t these many months allowed us to experience Penelope’s style of journeying? Have we not been pressed to learn something about the uses of confinement and the passage of time?

René Guénon’s study on the symbolism of weaving in The Symbolism of the Cross reveals cosmic dimensions of the metaphor. On the loom, the warp refers to the vertical threads that are formed and create the foundation of the weave. The weft (or woof) are the horizontal threads made by the shuttle passing through the warp. In cosmic terms, the warp corresponds to the archetypal or divine principles of the world and the weft is the time, place and conditions in which those archetypal energies manifest. The Hindu concept of Śruti, the vertical warp, corresponds to the transcendent principles of the universe. Smṛti, the horizontal weft, is the human interpretations and applications of those principles in life. Together these threads weave the world as a garment of divinity. In another beautiful metaphor, Śruti is compared to the light of the Sun and Smṛti to the light of the Moon, the two luminaries symbolizing not only the eternal and temporal but also masculine and feminine energies in the universe. In Joseph Campbell’s Asian Journals he describes Śruti as, “harkening to the voice of the living God, the Muse” (p. 176) and notes how these two concepts also communicate the polarity of knowing (Śruti), and seeking (Smṛti), which add another level to the cosmic dimension of the warp and weft.

What does this symbol of the loom offer for our contemplation of day to day experience? I would like to have us listen to it in relationship to our inner lives, the life of the psyche grounded in the archetypal patterns of nature. So much of contemporary culture privileges our outer world orientation at the great expense of our interior compass. Penelope’s journey challenges the notion that life happens only in relation to the world out there. It is as if it’s only when we are in an Odyssean epic and dealing with outer life and its collective human activities, that anything of value is going on. In James Hillman’s words:

Events are not essential to the soul’s experiencing. It does not need many dreams or many loves or city lights. We have records of great souls that have thrived in a monk’s cell, a prison, or a suburb. But there must be a vision of what is happening, deep ideas to create experience.

Those deep ideas are the vertical warp threads of the archetypal imagination, which myths, poetry and art render visible.

Penelope’s patient weaving and humble unraveling presents a paradox in terms of journeys. To undo what she has done means to go backward, start again—no forward progress. Yet it is the unraveling that keeps the story moving. The unraveling is what requires the spinning of new threads. In psychological terms the unraveling is a metaphor for old attitudes and habits, frames of mind undone in order for new threads and new patterns to emerge. Penelopean loom work means traveling to interior reaches where the warp and weft meet in such a way that kindle the light of deep experience. 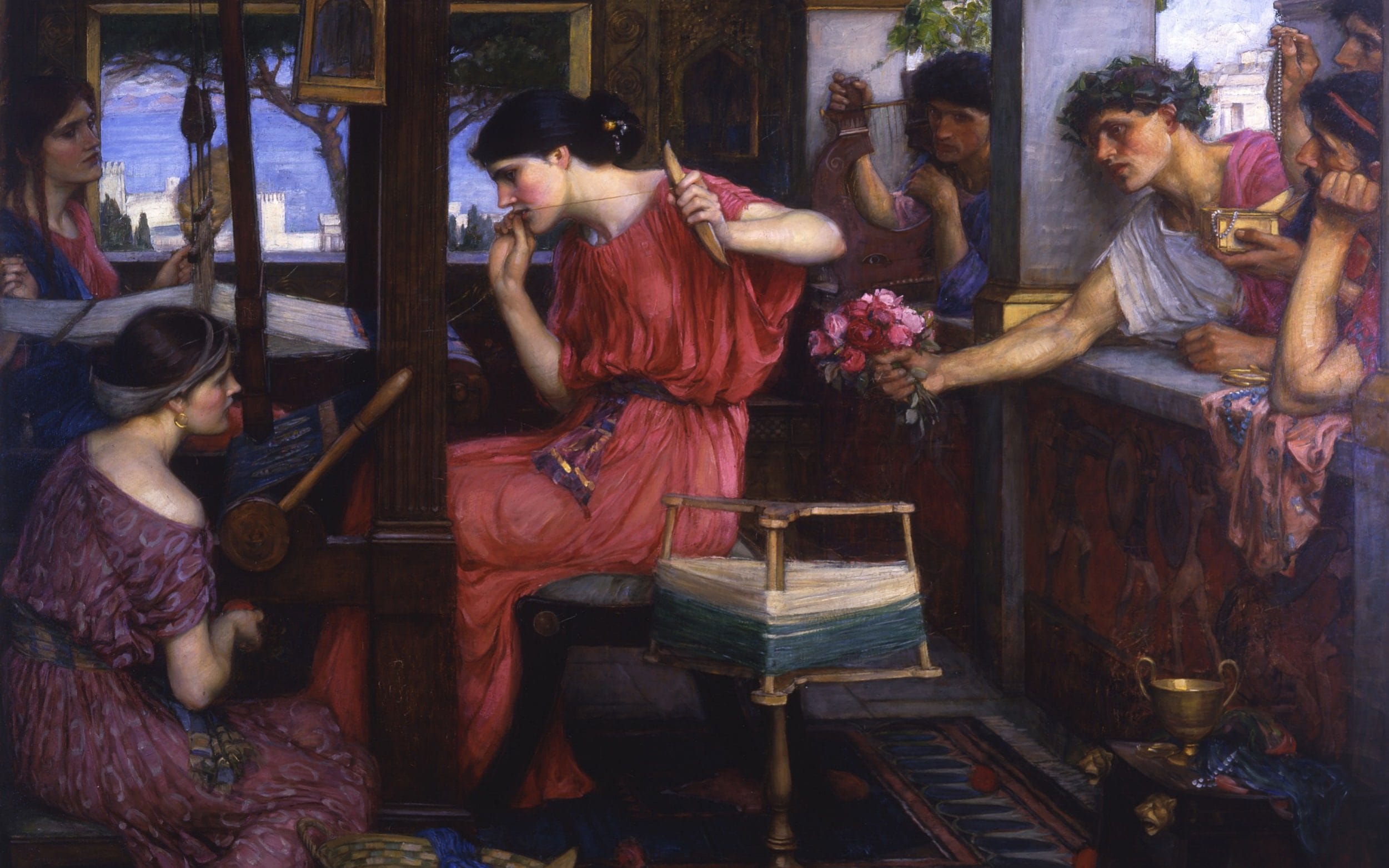