Joseph Campbell wrote about the great painted and engraved Paleolithic “temple caves,” as he called them, of southern France and northern Spain. Lascaux in the Dordogne and Les Trois Frères in the Pyrenees are two stunning caves that contain an array of images including animal forms and mysterious signs and figures. 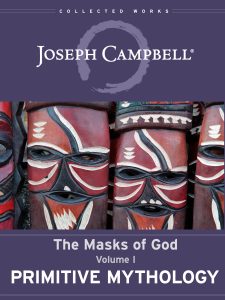 This wondrous art is old, much older than the development of cuneiform writing or the wheel. The artists may have created the images at Lascaux around 19,000 to 17,000 years ago, and at Les Trois Frères around 17,000 to 15,000 years ago. About Paleolithic temple caves, Campbell writes: “The fashioning of an image is one thing, the fashioning of a mythological realm another. And the remarkable fact, it seems to me, is that, for all their complication, these caves—or at least a number of them—are conceived as units, with outer and inner chambers of increasing power” (The Masks of God: Primitive Mythology, 397). He includes Lascaux and Les Trois Frères as examples of caves that display this increasing power.

According to Campbell, the cold and dark temple caves were probably used for the men’s rites. He describes the experience inside the Paleolithic caves: “A terrific sense of claustrophobia, and simultaneously of release from every context of the world above, assails the mind impounded in those more than absolutely dark abysses, where darkness no longer is an absence of light but an experienced force” (Primitive Mythology, 66). With light, the art is revealed.

The Lascaux cave is spectacular. Animals including bulls, cows, horses, and stags are painted with beautiful lines and colors on the walls of the Hall of the Bulls. On the left is a fascinating figure often called the Unicorn, even though it has two long straight horns. The Upside-Down Horse and the Cow with the Drooping Horn are in the Axial Gallery, which has been called the “Sistine Chapel of Prehistory.” The Crossed Bison are in the Nave. Campbell describes some of the images in a lower area called The Shaft: “…there is the picture of a shaman lying on the ground in a shamanistic trance, wearing the mask and costume of a bird. His shaman staff is beside him, bearing on its top the figure of a bird” (The Mythic Dimension, 73).

In the cave of Les Trois Frères there are many animal forms engraved on the walls of the grand Sanctuary chamber, “[…] fixing for millenniums the momentary turns, leaps, and flashes of the animal kingdom in a teeming tumult of eternal life. And above them all, predominant—at the far end of the sanctuary, some fifteen feet above the level of the floor, in a craggy, rocky apse—watching, peering at the visitor with penetrating eyes, is the now famous ‘Sorcerer of Trois Frères’ ”  (Campbell, Primitive Mythology, 308-309). Also called an animal master or a shaman, the part human, part animal sorcerer has antlers, a long beard, a tail, and appears to be dancing. This figure is engraved and partially painted in black.

Returning to the world above with its fresh air, beautiful animals, bright sun, and transforming moon may have been a rebirth experience. Campbell writes about Paleolithic temple caves, time, and eternity:

For these great painted grottoes…wherein all orientation to the quarters of the sky is lost, and time stops—or rather, continues without punctuation of day and night—were never dwelling places, but temples beyond the tick of time…Their herds are the herds, not of time, but of eternity, out of which the animals of the light-world come, and back to which they return for renewal (Historical Atlas of World Mythology, Part I.D, Digital Edition, Kindle Locations 686-689).

Many of the Lascaux and Les Trois Frères cave images are recognizable (horses and bison for instance), and yet others are puzzling such as the composite Sorcerer of Trois Frères. But I have a theory: I think the Sorcerer cave figure is an image in the Milky Way located above the tip of Scorpius’ tail, and as the earth rotates, the Sorcerer Milky Way image appears to dance across the night sky.

Thank you for reading. 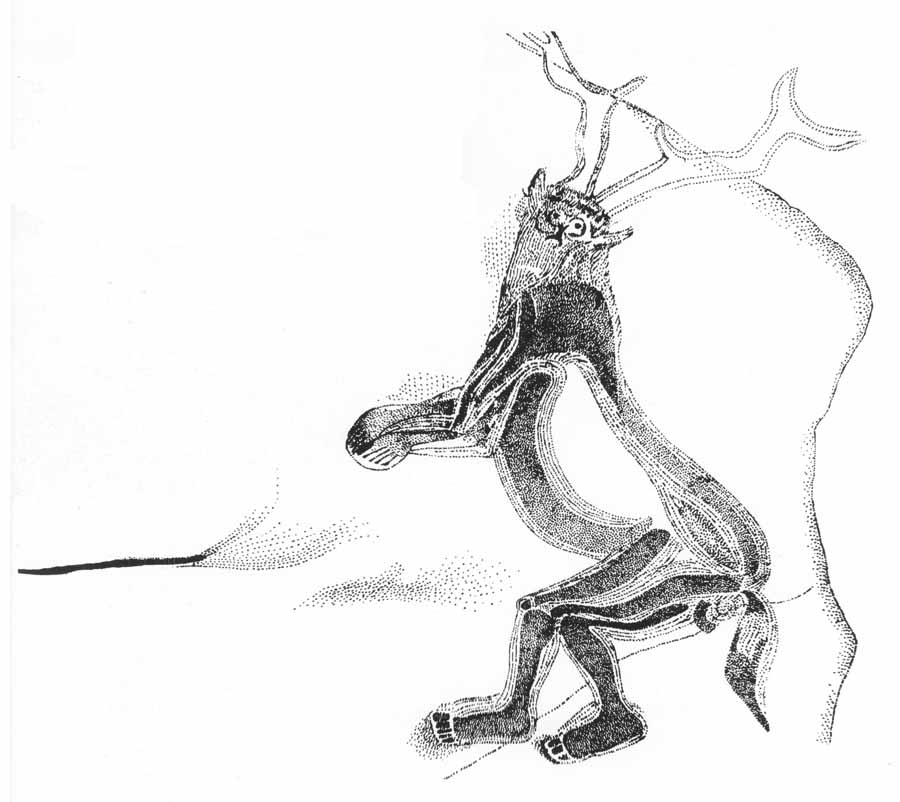