Joseph Campbell’s long career as a writer, speaker, and educator continues to impact students of mythology today, over thirty years after his death. This database represents not only his life’s work, but the work of JCF volunteers who make it their mission to preserve it.

Lectures from the latter part of Campbell’s career, starting in the early 80s.

Series III consists of six volumes (only the first is released), each with between five and ten audio lectures (at about 60 minutes each). 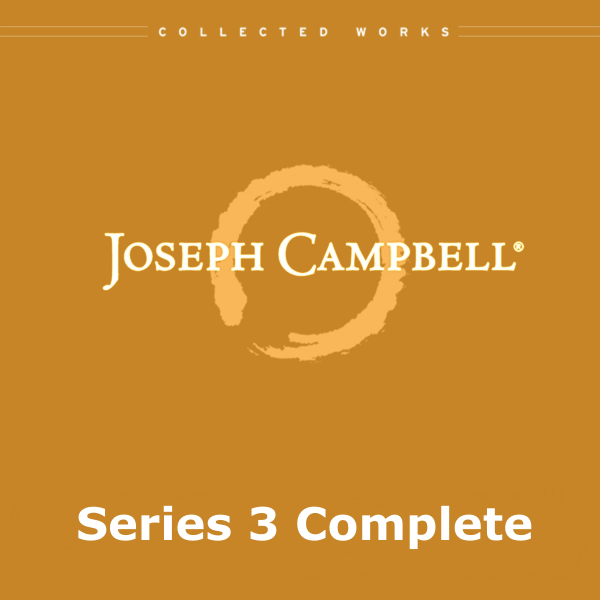 Or explore each lecture individually… 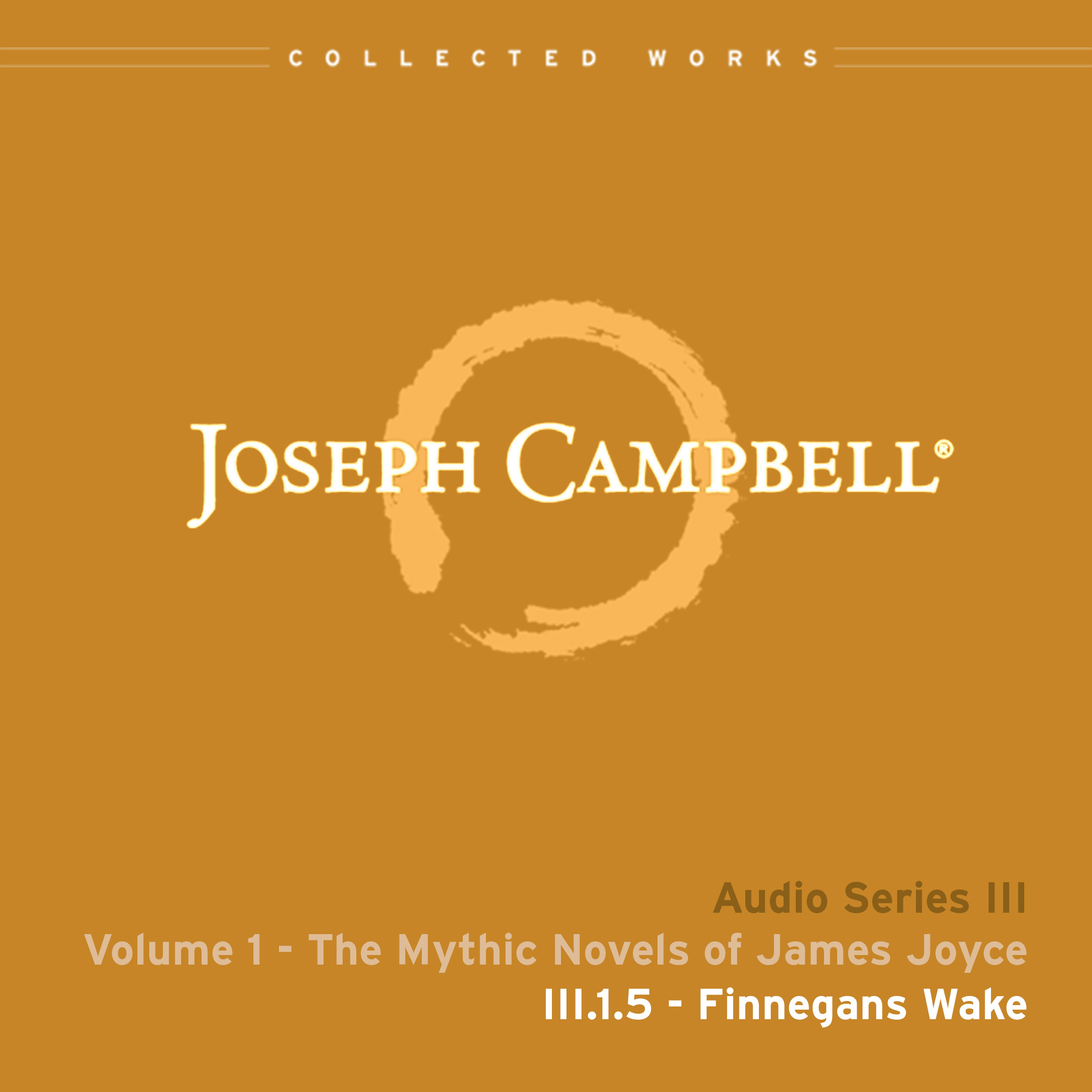 The name “Finn” goes back to an old Irish hero, “Fionn mac Cumhaill " [Finn MacCool], who was the guardian of Dublin Bay for many, many years.  And he was a great giant and he had a whole army of giants called “The Fianna.”  So Finn is back again.  — Joseph Campbell

Joseph Campbell provides an entertaining, insightful and thought-provoking lecture on James Joyce’s Finnegans Wake. This lecture, along with his book, A Skeleton’s Key to Finnigan’s Wake, provides deep insight into James Joyce artistic twists and use of the English language. This is a culmination and end of Dedalus’s flight. Campbell theorizes about the last book by James Joyce, which was never written. 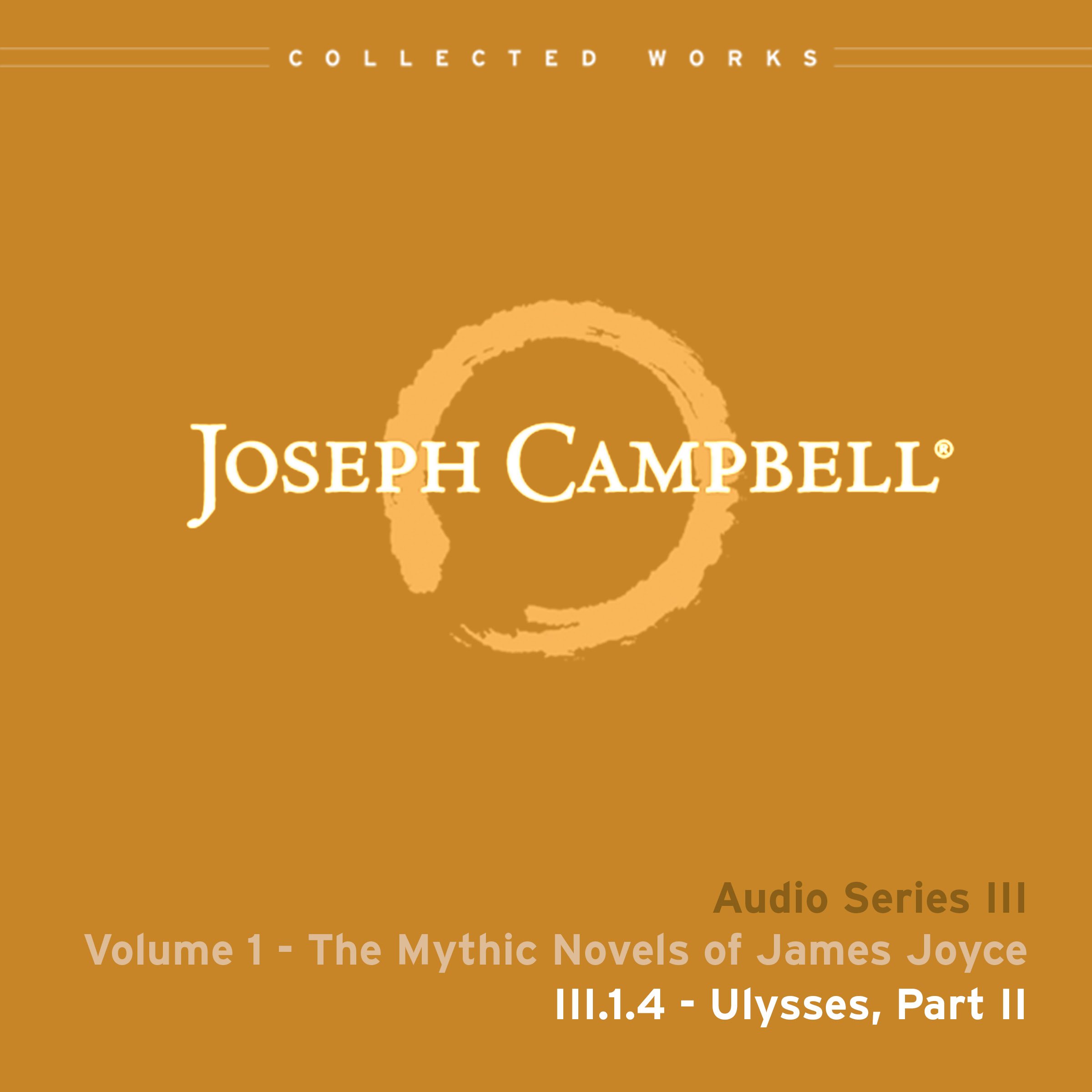 This talk, the fourth in Volume 1,“The Mythic Novels of James Joyce” is entitled “Ulysses, pt. 2.” It was recorded at the Esalen Institute on November 26, 1983. Joseph Campbell continues the reading of Ulysses and offers explanations of the many dimensions and symbolic layers of the text. Equipped with the necessary background and knowledge, he makes sense of this incredible masterpiece. This is a great journey through Dublin on June 16, 1904. The enlightening comments on Joyce’s rhetoric help explain, among other things, the comic genius of his work. Mythology can be fun when guided by the wit and wisdom of Joseph Campbell.

“Campbell: And so forth and so on.... Well, what happens is, Bloom walks in. And during the course of the occasion, the news comes to these people that the horse that won the race was, Throwaway. Bloom meanwhile has said that he has to leave to see Martin Cunningham about something. So he goes out. When he comes back they think what happened was he went out to pick up his money, 20 to 1. Nothing of the kind, he went out to talk to Martin Cunningham about the insurance for Mrs. Digham. But while he was out, Martin Cunningham came in, Martin Cunningham wasn’t where he went, so he’s come back and now everybody thinks he has collected 20 to 1 for his bet on the horse and standing treats to the house. So the big Irishman begins to taunt him for not giving a treat, and accuses him of being a Jew. And Bloom says, ”Well, yes I am a Jew and your God is a Jew.” Your God, well, that is too much for the guy and he just starts roaring after Bloom and Bloom knows well enough to run for it. The guy picks up a tin and throws it after Bloom down the street. And I just want to read the situation with Bloom’s departure.” 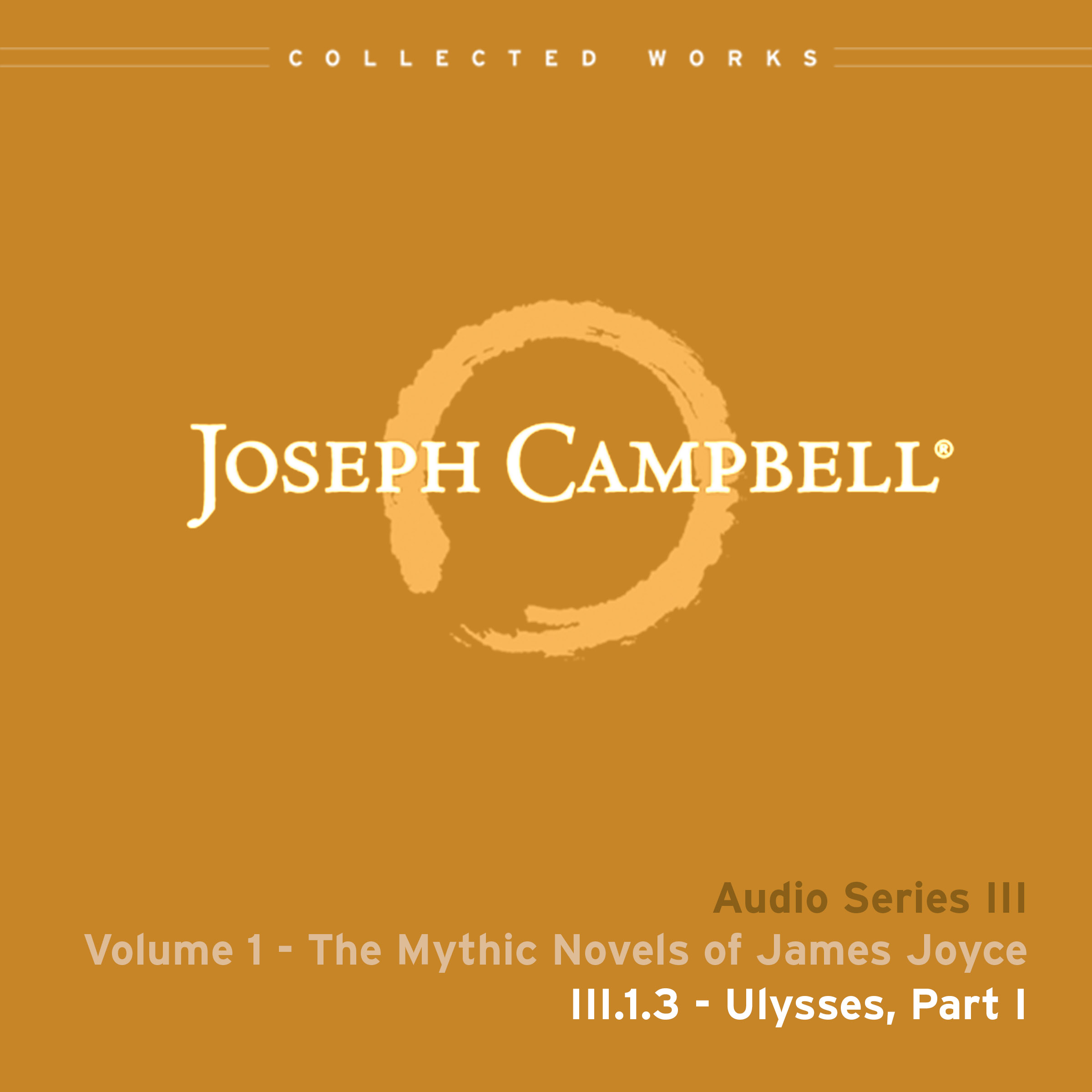 This talk, the third in Volume 1,“The Mythic Novels of James Joyce” is entitled “Ulysses, pt. 1.” It was recorded at the Esalen Institute on November 26, 1983. Molly Bloom is equated with Penelope and appears to Leopold as he prepares her breakfast. Joseph Campbell helps to interpret the psychological crisis as Joyce weaves the intricate story of Leopold and Molly. There’s a funeral, and Bloom, like most Irishmen, was a seasoned drunk which makes for a very amusing funeral indeed. Reading from the book Ulysses and interpreting the intricately weaved story, Joe offers a compelling explanation of Joyce’s story.

“One might speak also however of the woman as muse, you know the inspirer of the spirit, and, all that—that really is another aspect isn't it, if she is purely that, and is not in the role of temptress or wife or daughter or mother, that would be just woman as temp—that would be Beatrice. But the essence of the psychological transformation is of seeing the radiance rather than the carnal aspect. Joyce uses the word epiphany, [which] was the appearance of the little Christ Jesus to the Gentiles, to the coming of the three magi, this is the epiphany, the revelation to delay community or to mankind of the incarnate Christ. And when one sees the radiance through all things, all things are the incarnate Christ. This is perfectly good Buddhism, all things are Buddha things, the only difference between any of them—or any of us and the Buddha is we do not know it, and we do not act out of our Buddha consciousness. So, the Beatrice is the revelation to Dante of the light you might say of the spirit, and he follows that lead right up to the throne of God.

A Portrait of the Artist as a Young Man (Audio: Lecture III.1.2) 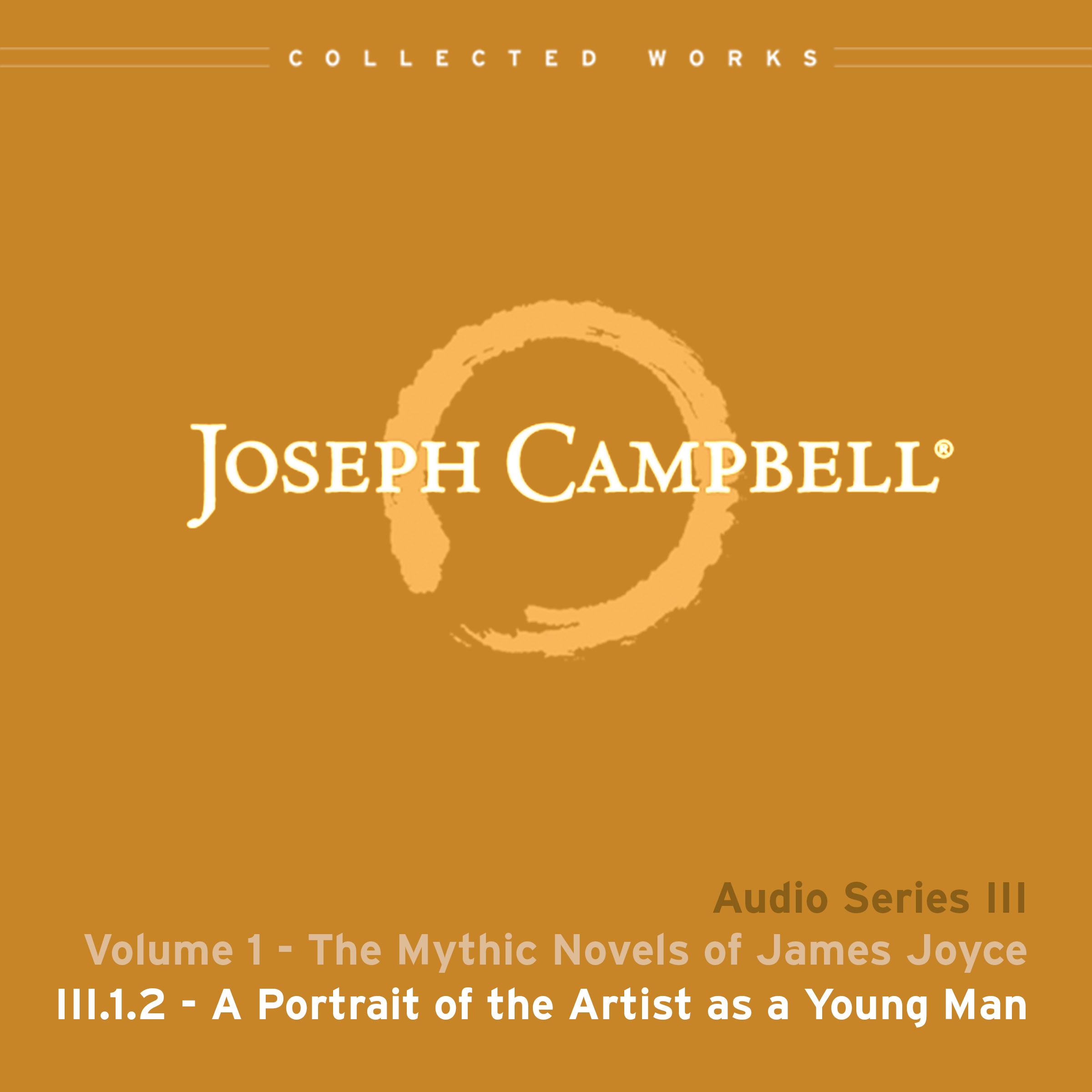 “You’ll notice what’s going on here. All the details out there are experienced by the boy in terms of his own psychological association system. And this is the way Joyce is building this whole, this whole big thing. It’s always the inward reflections that accompany the action that he’s putting his stress on. And you’ll see how these develop. As the boy goes on and the education of the Catholic school system gets into him he’s incorporating the imagery of the Christian mythology in his associations. And it’s through this that he gradually affects that transition from Ireland to the continent, the flight of Daedalus from the local to the general.”

Campbell interprets Joyce’s Portrait, linking both Christian and Irish legends. In his own life he proclaimed to Bill Moyers, “...I took my instruction from reading Thomas Mann and James Joyce, both of whom applied mythological themes to the interpretation of the problems, questions and concerns of young men growing up in the modern world.” True words for the 20th and now the 21st Century. Learn of Daedalus’ life and the themes that emerge reliant to an archetypal critique. The labyrinth motif can be confusing, but if you learn the secret, you can pay a visit! This talk was recorded at the Esalen Institute on November 25, 1983. 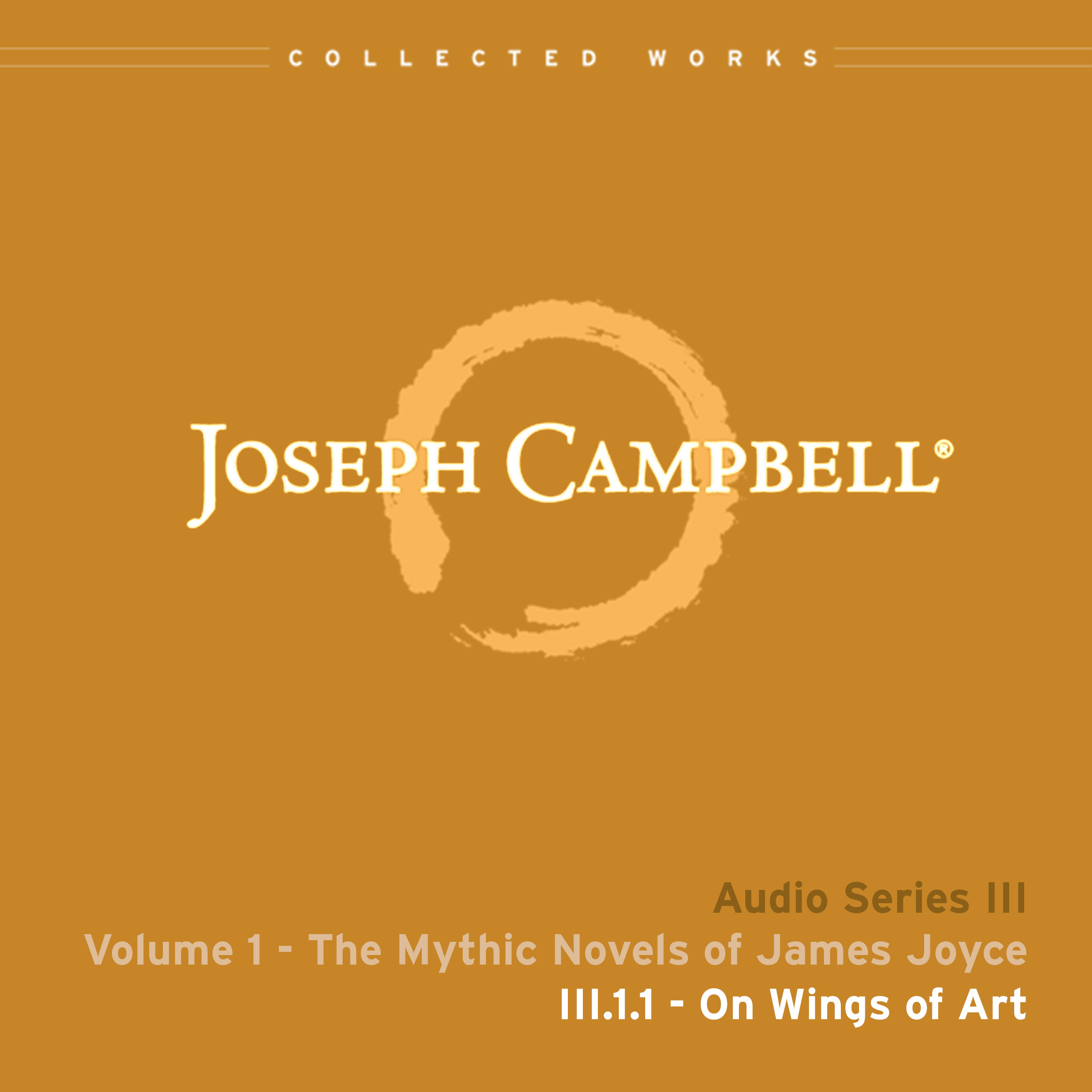 This talk, the first in Volume 1, “The Mythic Novels of James Joyce” is entitled “On Wings of Art.” It was recorded at the Esalen Institute on November 25, 1983. Only Campbell could make Joyce seem so accessible, and he was eminently qualified to do so since he spent a good portion of his life studying Joyce. From Campbell’s early association with Henry Morton Robinson, Joe could interpret the works of James Joyce in terms of myth and art. His literary and mythological passion for Joyce is informative and infectious! Campbell reading from Joyce with his New York accent is worth hearing in and of itself. A delightful introduction to James Joyce.

“That’s all there is to it. The rhythm includes shapes, colors, the spaces between. And in writing if all you’re interested in is communicating information the problem is simply to write literate intelligible sentences that are not too long to be understood and paragraphs that are... shaped so that they’re consistent in themselves and the next paragraph, you know, when to start it so that the argument is carried on. But if you want to write and have a radiance come through, this rhythm of your prose is very very important, the words that you choose, the clang of the vowels and all, all of these things matter.”