“The Shadow Knows . . .” – which is where I stop. The complete thought is uttered in mysterious tones during the opening sequence of  The Shadow (as alluded to in an earlier post, a radio show airing from 1937 to 1954, initially starring Orson Wells). “The Shadow” is the secret identity of Lamont Cranston, who learned, from a Yogi priest serving as the “Keeper of the Temple of the Cobras,” in Delhi, India, the power of how to cloud men’s mind so they cannot see him, in effect making himself invisible – a tool he wields each week to thwart the plans of evildoers.

“Who knows what evil lurks in the minds of men? The Shadow knows!”

Intriguing that Lamont Cranston, when using his powers, appears invisible to others; he doesn’t physically become invisible, but just can’t be seen, suggesting to me one’s Shadow is what one does not see. I also find it significant that in the popular radio show, which spawned a pulp comic, there is a distinction between Evil and Shadow – the twain are not the same. So two major take-aways for me from pop culture (which, as an expression of the collective psyche, is as valid a source as that of any of Jung’s observations, all arriving at the same place) are that Shadow is what is unknown (whether about oneself on the microcosmic scale, or society-at-large on a grander scale), and shadow is not the same as evil.

Evil, though, often serves as a portal guardian, dissuading the fainthearted from crossing that threshold between Light and Dark, between the Known and the Unknown.

With that in mind, I enjoyed your posts above, James – particularly the shadow nuggets you gleaned from the Gospel of Thomas and the dream treasure of “Invictus.” Mysterious indeed are the workings of the Unconscious, but we can know its workings when we experience its effects (in the same way we know the wind exists not because we can see it, but feel and see what it does).

What problem I have with Shadow is because of the baggage it carries, relating it to Evil – just one term of a duality: Black/White, Light/Shadow,  Good/Evil.

But I’m not a dualist; mine is more of a polytheistic perspective.

So between
Black and White
There is the whole range of colors.

Between a smashing fist on the face and
Trying to touch the air
There are all the textures of
Feeling
Burning
Throbbing
Pushing
Hugging
Fondling
Tickling
Kissing
Brushing
and light wind on the skin.

Your world is all these elements
Of life and sound
Of taste, smell and touch
Woven together in many dimensions on the
Fabulous loom of your brain.”

There is, in my experience, so much more to Shadow than just dark, or black, or evil. There is so much texture, so much depth, to what is Unseen. 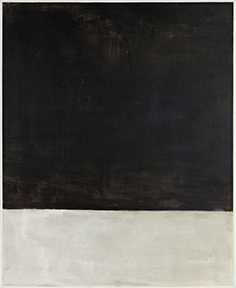 The black field in the upper section of this Rothko work – Untitled (Black on Grey), 1969 – appears a solid color in a picture this size viewed over the internet. But in person, the blackness of a Rothko painting is an epiphany, displaying a range of textures, saturation, and depth. On the page, it’s just black – but in the flesh one can get lost in a Rothko

Not always a bad thing – appreciation, rather than fear.

And, as Lamont Cranston tells us, tending to shadow can at times serve as a tool to thwart evildoers.