No worries, Shaheda – you didn’t post to the quote database, but you and Robert did wander down an interesting off-ramp into your own conversation in a thread I created here in COHO called “Things Joseph Campbell Never Said” – which I designed to cache sayings mis-attributed to Joe. Of course, part of the problem of a public forum is that any thread tends to take some intriguing twists and turns following off-topic tangents, which is part of the fun – but I’d like to keep that thread focused on the misquotes.

However, I didn’t want to lose this dialogue between the two of you either, which merits its own thread. Hence the admin operation of “splitting” the discussion (first time I’ve done that on this message board – happy to see it works; I’m likely to do the same with Nandu’s discussion of where he disagrees with Campbell, separating his disagreements over Campbell’s view of India from his characterization of Campbell as a mystic, allowing for two separate discussions). We can think of it as switching a train onto a side-track to let another train pass.

I do appreciate the train theme, which is very much part of the American mythos. Trains opened up the United States to settlement, accelerating the spread of the population from coast to coast, supplying towns founded in otherwise remote parts of the country, and powering trade.

My wife, Des, loves trains – and then my mom was a Harvey Girl in La Junta, Colorado (Fred Harvey established  a chain of Harvey House restaurants at train stations in the 1880s designed to provide a hearty, wholesome meal to the passengers of a train in the barely  30 minutes they had at a train stop; Harvey Houses were staffed by young single women who lived on site in a special dormitory and followed strict rules of grooming, dress, and behavior). Harvey Girls were the subject of a popular Judy Garland musical of the same name – released a few years after my mom’s time wearing the apron; along with Pullman Porters, sleeping cars, and upper and lower berths, the Harvey House and their corps of waitresses are part of the romance of rail travel in the Old West.

I have traveled by train across the southwest, and Des and I enjoyed a wonderful trip with our own little room many Christmases ago on Amtrak’s Coast Starlight, traveling from the Bay Area up to Seattle past Mt. Shasta and through the beautiful snow clad mountains of northern California and Oregon on into Washington – much more leisurely and pleasant than the hassle of airport travel. We also have enjoyed more than our share of small touristy trains from days gone by, going places cars never go – whether just up the road from us in the Sierra Nevada foothills, along the Verde River Canyon in Arizona (saw a number of bald eagles on that trip), or, our favorite, the Leadville, Colorado and Southern Railroad in the Rockies.

What made that last trip so stellar is where we sat on the return: a local friend pulled a few strings for us, and we rode more than an hour on the outside platform at the front of the locomotive (which you can see in the photo below – alas, we don’t have a good one of us there), at over 10,000 feet elevation – quite a rush! 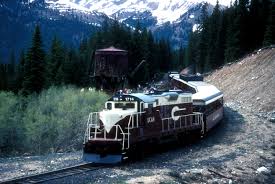 And then I’ve hopped one freight, in Shelby, Montana, back in my hitchhiking days. Turns out you get very dirty traveling as a hobo – I much preferred hitchhiking.

Though freight trains still play a major role in interstate shipping, seems travel by train, at least in the Western United States, is relative rare, thanks to our interstate freeway system – Americans like the independence of driving, so the car remains supreme.